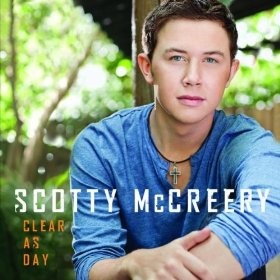 Scotty McCreery—winner of the 10th edition of American Idol, and owner of the new No. 1 title on Billboard‘s album chart, Clear as Day—sets a handful of chart records this week that certainly sound impressive.

As Billboard reports, McCreery is the first country act to debut at No. 1 on the Billboard 200 with a debut studio album. At 18 years old, McCreery is also the youngest man to open at the top of the chart with a debut release; he beat former B2K singer Omarion, who, at age 20, made his solo debut atop the chart in 2005.

Of course, neither of these records would have been possible without the imprimatur of Idol, however talented McCreery might be. It’s not like he’s burning up the airwaves or iTunes—his highest-charting single to date, “I Love You This Big,” hasn’t gone any higher on the Billboard Hot 100 than No. 11, or No. 15 on Hot Country Songs. McCreery’s No. 1 debut is all about the magical promotional juggernaut that is network television, particularly its top-rated show.

But even in the Idol context, McCreery’s out-of-the-box chart performance looks mighty. Clear as Day is the first debut album by an Idol finalist to top the Billboard 200 since 2005, when that year’s fourth-place finalist, Chris Daughtry, rose to the top of the chart with Daughtry.

Even more remarkable, it’s the first No. 1 debut album by an Idol winner since late 2003. That’s when second-season victor Ruben Studdard topped the list with Soulful. Other than Studdard, season-one winner Kelly Clarkson (her debut Thankful rang the bell in early 2003) and now McCreery, all of the Idol winners have debuted and peaked somewhere below No. 1. (A couple of winners, including Clarkson and Carrie Underwood, have come back since 2003 with chart-topping albums, but those were second albums or later, which didn’t benefit directly from an immediate Idol push.)

After an eight-year shutout by Idol winners from the Billboard 200’s penthouse, who should get credit for McCreery’s success? Should it be new judges Jennifer Lopez and Steven Tyler, who helped give the show’s ratings an improbable boost in its first post-Simon Cowell season? Is it the winsome McCreery, the show’s first non-rock winner in four seasons? Was it the millions of Idol voters, who finally picked a winner whose album they’d actually want to buy?

Nah. I’d give the win to Jimmy Iovine, chairman of Universal’s biggest label group. The guy knows how to do something really basic: pick a good release date.

That skill—paying attention to the music industry’s release schedule and choosing a week where the competitive bar wasn’t too high—turned out to be critical, because it probably made the difference between yet another Idol also-ran release and McCreery’s bell-ringing success. If the album had dropped just a week earlier—or, say, next month sometime, during the holiday-buying sweepstakes—it likely wouldn’t be a chart-topper.

One number I haven’t mentioned yet in the rundown of McCreery’s achievements is the sales total that put him on top this week: 197,000. That’s a very respectable sum for a Billboard 200 chart-topper. But it’s not remarkable. Last week’s No. 1, up-and-coming MC J. Cole’s Cole World: The Sideline Story, rang the bell with 217,000 in sales; McCreery would have fallen short of that total. The week before, McCreery would have edged out chart-topper Tony Bennett’s Duets II (179,000 in sales), but only by about 10%—and the octogenarian didn’t have the biggest show on television boosting him.

Speaking of that show, looking just at Idol finalists, McCreery’s debut sales week is fine, maybe even stellar compared with recent history. But it’s not at all exceptional historically. Even after the Season 10 Idol “comeback,” his sales total—No. 1 debut or not—is still toward the low end of the pack.

Here’s a list of debut albums by various Idol contestants. I’ve included all 10 of the show’s winners, plus several big-selling non-winners—I only included an also-ran if their album made the chart’s Top Five. Included in each listing is the act’s winner or runner-up status, as well as each title’s release date, Billboard 200 debut position and first-week sales total.

(* These are not, strictly speaking, Cook’s and DeWyze’s debut albums; each had released albums independently before appearing on Idol. During the two finalists’ respective appearances on the show, their indie discs received sales boosts, but none appeared on the Billboard 200.)

Among these 16 albums by Idol winners or high-charting runners-up, McCreery’s 197,000 beats only four other albums. Embarrassingly, the three weakest-performing albums were from Idol winners: Sparks, Allen and DeWyze. (The latter two really stunk up the joint, missing the Top 10 and never catching fire; Sparks started slow but eventually saw her debut cross platinum and spawn several huge pop hits like “No Air” and “Tattoo.”) McCreery did considerably better in week one than all of these underperformers—but he fell short of the first-week totals of nearly a dozen other Idolalbums.

The Idol defender might retort: Ah, but all this proves is that sales across the music industry have gotten steadily weaker since 2003. True enough, but check out runner-up Adam Lambert: his 198,000 first-week total, which edges out McCreery’s, happened in 2009 (a year with a significantly weaker album-sales climate than we’re having in 2011, when sales have staged a mild comeback). Or look at 2008 winner David Cook, who in the not-too-distant past sold 280,000 albums in his first week, more than 40% higher than McCreery just did.

You’ll also note that most of the other albums dropped in the hotly contested holiday season, from mid-November through Christmas. Again, reiterating my earlier point, McCreery only looks mighty because his label chose an unusual (for Idol) October release date; if he’d come out in November or December like most past winners, he’d have been crushed. Consider the all-time biggest-selling Idol, Carrie Underwood—her 2005 debut Some Hearts had the misfortune of landing during the same November week as Madonna’s Confessions on a Dance Floor. Carrie’s 315,000 in sales wasn’t enough to top Madge’s 350,000, and Underwood’s disc peaked at No. 2—despite going on to become one of the best-selling albums of the entire decade.

It’s been said for more than five years now that the relationship between American Idol, the TV show, and American Idol, the pop-star launcher, has grown weaker. Most critics point to 2006 winner Taylor Hicks, with his prematurely gray hair and cruise-ship shtick, as the start of the breach. But even Hicks, with his nearly 300,000 in first-week sales, looks damned respectable compared with more recent winners, McCreery included.

Recently, after witnessing the precipitous dropoff in sales by winners Kris Allen and Lee DeWyze, the Idol producers moved to shore up the show’s connection to the music industry and the charts. In late 2010, Simon Fuller’s 19 Entertainment, producer of Idol, negotiated a label switch for the show’s contestants. For the show’s first nine seasons—winners Clarkson through DeWyze—all Idol releases came through the Sony Music (including BMG) family of labels. Clear as Day is the first album by an Idol to be released by the Universal Music Group (in McCreery’s case specifically, the Mercury Nashville subsidiary).

Back to Jimmy Iovine: If you watched Idol this year and wondered why the punchy producer and Universal executive had been added to the show as a weekly mentor, it wasn’t his irrepressible energy or his 30-plus years shepherding superstars. His company has a vested interest in guiding the finalists to strong sales, and showing Universal can do better with the finalists’ output than Sony had been doing lately.

This week’s chart, then, is Universal’s report card; and depending on your perspective they either got an A or a gentleman’s B-minus.

Merely finishing McCreery’s album in time for an October release—earlier than any prior winner’s album—must have been something of a feat for Iovine and McCreery’s album producer, Nashville veteran Mark Bright. But it was clearly worth it, as it gave McCreery a lower bar to top the chart. The headline this week isn’t “McCreery album debuts with solid, unexceptional 197,000 in sales” (that would be the B-minus interpretation). Instead, by scoring a No. 1 debut, Universal and McCreery get A-level headlines like, “McCreery debut makes album chart history.”

Get past the headline, however, and McCreery’s performance shows how much work Idol and Universal have ahead of them to rebuild the show as a hitmaker. Virtually all TV-music phenomena, as they age, fade in influence on the charts; this fall, we’ve already seen new tracks by the cast of Glee peaking much lower on the charts than they were a year ago.

American Idol, then, is attempting a particularly difficult goal, on two tracks: reversing trend both in Fox-TV’s ratings and in Billboard‘s charts. Scotty McCreery’s No. 1 debut is undeniably helpful for P.R. and morale. But a debut week above 200,000 or 300,000 for a future winner—and some serious radio hits—would be even better.