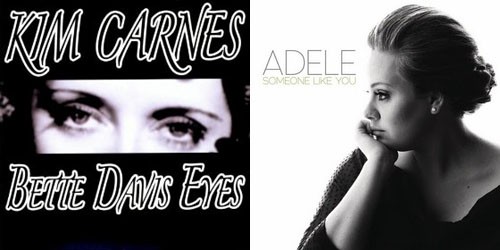 The first week I remember ever hearing American Top 40 with Casey Kasem on the radio, back in the summer of 1981, the No. 1 spot was a real cliffhanger.

As Kasem explained, the week before, Kim Carnes’s synth-pop smash “Bette Davis Eyes” had ceded the top spot after about a month, to a song by a Dutch novelty act calling itself the Stars on 45. Their goofy hit was a lite-disco clap track riding over a medley of rerecorded pop tunes (70% by the Beatles, an easy way to score a smash if ever there was one). In the year of Jane Fonda and aerobics-mania, the Stars on 45 were a momentary worldwide obsession.

Emphasis on “momentary”: After a one-week pause, Carnes rebounded to the No. 1 spot, a happy ending to my first exposure to Billboard‘s iconic Hot 100. (The charts are fun when you’ve got a rooting interest.)

What I couldn’t have known in 1981 was how rare, relatively, a song returning to the top spot was. Prior to Carnes’s hit, only 28 songs out of the more than 500 Hot 100 chart-toppers since 1958 had rebounded to the top.

It’s not all that rare anymore. In fact, the song sitting atop the Hot 100 right now, in its third week there, is a rebounder: Maroon 5’s “Moves Like Jagger,” featuring Christina Aguilera. In 2011 alone, it’s the fourth song to move back to No. 1 after falling out.

Four weeks ago, after a summer of steady sales increases and radio growth, Aguilera and Maroon 5’s Adam Levine—two of the artists-cum-judges for NBC-TV’s The Voice—assumed the penthouse with their comeback hit. After just one week on top, the ultra-perky, whistling “Jagger” gave way to one of the most downbeat songs of the year, Adele’s “Someone Like You.” Like the Levine-Aguilera axis, Adele was benefiting from TV exposure, having performed the stately ballad on the MTV Video Music Awards in late August. Except Adele’s TV-fueled bounce was more instantaneous and dramatic—right after the VMAs, a massive influx of digital song sales put her on top. One week after that, with sales for “Someone” fading a bit, “Jagger” reclaimed the Hot 100’s top spot. It’s still sitting there a week later, with Adele parked at No. 2.

In the weeks to come there’s a decent chance Adele will do to Levine-Aguilera what they did to her and rebound into the top spot. That’s because radio airplay for “Someone” is only now catching up with its huge digital sales. This week, a month after the song’s big move up the charts, “Someone” finally enters the top 10 of Billboard‘s Radio Songs chart, a component of the Hot 100. Assuming Adele’s sales stay strong—she moved nearly another 200,000 downloads last week—and her airplay keeps growing, “Someone” could be back atop the Hot 100 by October.

The last five years seem especially strange when you look at prior chart history. In the 25 years after Kim Carnes’s “Bette Davis Eyes,” only 14 more songs returned to the top of the Hot 100 after vacating. That’s 43 rebounders, total, from 1958 to 2006 (from “Volare” to “We Belong Together”), fewer than 5% of the more than 900 songs topping the list. (A complete list of Hot 100 rebounders can be found in this very informative blog post.) There were long periods pre-2006 without any rebounders at all, including a five-year stretch between the Rascals’ “Groovin’” (1967) and Gilbert O’Sullivan’s “Alone Again (Naturally)” (1972), and an epic 11-year period of reboundlessness from Men at Work’s “Down Under” (1983) to Ace of Base’s “The Sign” (1994).

Just since 2006, then, we’ve had as many rebounders as in the entire prior quarter-century. Maroon 5, our current chart-topper, has done it twice in that period; both of their No. 1 hits have been rebounders, including “Moves Like Jagger” and 2007’s “Makes Me Wonder.” Do-si-dos between warring hits are becoming more commonplace—2011 kicked off with a four-week stretch in January where Katy Perry’s “Firework” and Bruno Mars’s “Grenade” passed the No. 1 spot back and forth to each other, one week at a time, like a game of hot potato.

So what happened a half-decade ago to change this Hot 100 pattern so dramatically? The digital era, obviously: iTunes and its peers allow consumers to buy songs on a whim like never before, sending songs flying up the chart before radio has a chance to catch up. It would be wrong to call this misalignment of sales and airplay a serious problem per se. But even as it’s made the Hot 100 more unpredictable and exciting, it’s also make the big chart less authoritative.

When we non-music-industry laypeople look at the charts, whether we’re looking up the No. 1 song from the day we were born, or figuring out what was a particular year’s song of the summer, we like to think of chart-topping hits as having “reigns”—consecutive stretches of weeks. The whole point of the Hot 100, a marquee chart that measures nothing more or less than the bigness of hits, is to mark mini-shifts in popular culture.

Chart fans obviously want Billboard‘s tallies to be as accurate as possible, and if a song is big one week, wanes, then makes a comeback, we naturally want that reflected. But it rather devalues a No. 1 hit if the reason for its appearance in the penthouse isn’t a case of, “The biggest song from coast to coast!” rather than, “A song that a sizable bunch of iTunes buyers bought last week, and about 0.5% of the country is hearing on their car radios!”

Even in the so-called good old days, pop hits were always regional. Never mind the large portions of America that consider country or R&B radio their de facto top 40; even among those parts of America listening regularly to pop radio, hits tended to break out of pockets of the country before sweeping the nation. A Billboardchart hit could reach the Top 20, maybe even the Top 10, with a sizeable portion of the nation’s Top 40 listeners still unaware of its existence. Generally, though, if a song in the late 20th century reached No. 1, it was getting some airplay on virtually every pop station in the nation.

That’s not the case anymore, to a large degree. Making a hit record these days is like electing a congressperson; it’s all about connecting with the small, passionate percentage of voters who show up.

Or rather, click: if 300,000 consumers—say, rabid Eminem or Rihanna fans ready to buy any new single by them—push “BUY” at iTunes for a single in a week, that’s usually enough to send the song to the Hot 100’s Top 10, Top Five or even No. 1. That’s even if less than a dozen radio stations have played the song at all. The days when sales of songs and radio requests would feed off each other and sweep a hit up the charts are largely gone. Hits emerge in starts and fits.

Big Hot 100 hits now essentially have two lives: the first burst from early-adopter fans, followed by a drop and then a comeback when radio programmers and casual listeners catch up. “Moves Like Jagger” made a splashy debut right after Levine and Aguilera promoted it on the final week of The Voice in late June; that spurred a first-week sales total of 213,000 and a big Hot 100 debut in early July, all the way up at No. 8. As the summer progressed, “Jagger” fell as low as No. 62 before staging the late-August comeback that brought it back to the Top 10 and soon, No. 1.

Was “Jagger” really an insanely hot song in early July and then, by early August, in oblivion? Of course not. But the Hot 100 is supposed to give us a general sense of how hot, relatively, a song is at any given moment. Thanks to these weird patterns it can’t really do that anymore—when discussing hit records with my less chart-savvy friends these days, I feel like I have to put an asterisk next to every other song.

I’m less bothered by these pear-shaped chart patterns by big hits than I am by the chart distortions caused by lesser “hits” fueled entirely by faddish iTunes sales. In the digital era, the Hot 100 has been invaded by scores of album cuts by superstars, or tracks promoted on TV, that spend one or two weeks on the list, often at abnormally high chart positions, and then disappear. That’s space on the chart that could have gone to an emerging regional hit, rather than the umpteenth unpromoted album cut by Taylor Swift or Lil Wayne. It’s even starting to distort chart history: last February, the all-time record for most Hot 100 hits was stolen from Elvis Presley and given to the cast of Glee, who’ve scored a staggering 156 hits in two short years (topping the King’s 108 chart entries earned over decades). Around 10% of these Glee“hits” spent more than two weeks on the chart.

It’s odd to yearn for the bad old days when radio programmers held more sway over the Hot 100; Top 40 radio is so lifeless and over-researched, even corrupt. Also, there’s something exhilarating about the public making a song a hit in the blink of an eye. (And goodness knows I can’t complain about any scenario in which Adele’s gorgeous “Someone Like You” hurtles to No. 1.)

But I want the Hot 100 to represent the pop tastes of all music listeners—even the most casual—rather than a small, short-lived coterie. Billboard did the right thing when it brought digital sales to the Hot 100 six years ago. Now, if the magazine established some kind of minimum-airplay rule before a song could make the big chart, I confess that I wouldn’t mind at all.