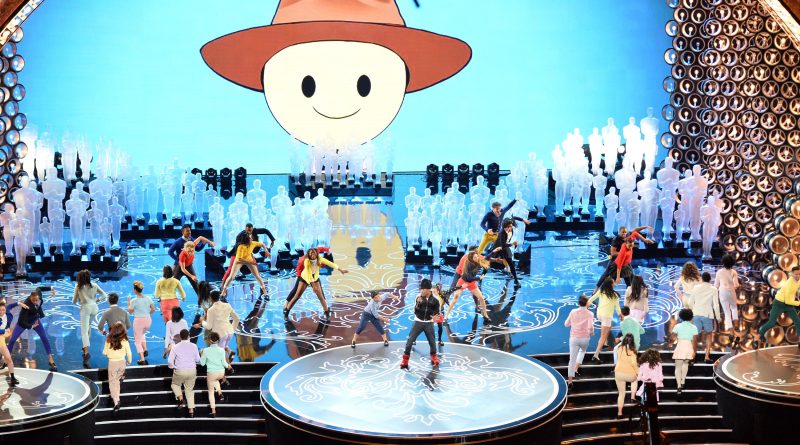 That’s the longest period in Billboard Hot 100 history without a lead black artist at No. 1—including all of 2013, as I noted a while back here on Slate. Fortunately, that drought has come to an end, as “Happy,” Pharrell Williams’ exuberant, irrepressible pop song, ascends to the top spot. He’s the first black person to ring the bell since December 2012, when “Diamonds” by Rihanna was on top.

In several ways, “Happy” is the perfect song to break this anomalous blockade of African-Americans atop the premier U.S. song chart. For starters, it’s a self-made hit. In this era when the top credit in pop music, particularly hip-hop, is the word featuring, “Happy” sports no secondary artist credits whatsoever. It’s the first No. 1 without an assist in a couple of months, after three straight smashes with featured credits (two of those supporting roles, it should be noted, by a person of color). In addition to singing the tune by himself, Williams also takes sole possession of the song’s writing and production. Talk about controlling your own destiny.

What’s more, Pharrell could have ended our drought of black No. 1’s months ago. He recorded “Happy” for the soundtrack to last year’s animated blockbuster Despicable Me 2. Thanks to this movie affiliation, it was a nominee for Best Original Song on last night’s Academy Awards, where Pharrell performed the tune—complete with a new version of his awesome Grammy hat.

When the Despicable sequel was released last July, Pharrell was a bit busy: He co-wrote and sang on both of 2013’s Songs of the Summer: Daft Punk’s No. 2 smash (and future Grammy-winner) “Get Lucky,” and Robin Thicke’s No. 1 mega-smash “Blurred Lines.” Much as we all enjoyed that seasonal death-match—short version: Thicke won the battle, the robots won the war—it was a sign of R&B’s malaise that Williams took second-banana credit, despite his pivotal role as a co-writer of both songs. In the latest issue of Billboard, a representative of Universal Pictures’ soundtrack division admits that they shied away from promoting “Happy” while Despicable was in theaters, given Pharrell’s summer omnipresence. Not long after Pharrell released “24 Hours of Happy,” his art-project-cum-music-video, he signed with Columbia, which began promoting the track to radio as part of the song’s Oscar campaign. Mission accomplished: Pharrell’s debut album on Columbia, G I R L, arrives today, one day after the Oscars, already sporting a No. 1 hit.

But the song always had culture-moving potential. Thanks to its unabashed retro-pop friendliness, “Happy” may be the ultimate 2014 crossover record. Or, to put a finer point on it: This may turn out to be white people’s favorite hit by a black person in a decade.

I’m specifically thinking of “Hey Ya!” by OutKast, a song that sat atop the Hot 100 just over 10 years ago, in January and February 2004. André 3000’s bouncy homage to ’80s new wave and power-pop, cross-pollinated with funk, was the crossover jam of its day: not only topping the pop chart but making the R&B Top 10 and the Top 20 on the Modern Rock chart, a rare trifecta. A cynic might refer to “Hey Ya!” as hip-hop with water wings—a nominally “rap”-related song with little actual rapping in it, cuddly enough for your parents to love. But that doesn’t make “Hey Ya!” a bad song, and despite a period of burnout recallable by anyone who attended a wedding in 2004 or 2005, the track maintains a strong pop legacy and near-universal respect.

By the same token, I expect we’ll all be a little sick of “Happy” by this summer. (As one Facebook friend-of-a-friend put it, “I figure I’ve only got about one more week before I want to punch this song in the nuts.”) But I also suspect the song’s charms are durable enough to survive an OutKast-like burnout period. “Happy” is R&B in the purest sense of “rhythm and blues”—Williams started as a drummer, and like so many of his productions “Happy” is driven by its percussive, clapping rhythm, addressed right in the lyric: “Clap along if you feel like happiness is the truth.” In essence, the song is a secular gospel tune—something that could be said of a lot of R&B ever since Ray Charles helped invent the form, but on “Happy” it’s text, not subtext, which makes the song openly joyous. It’s chemically irresistible to anyone who’s enjoyed a Motown song in the last 50 years, or the spiritual soul of the early ’70s. Importantly, it’s retro, but it’s not retro-fetishist, which would have been the kiss of death.

For pop critics and chart historians, though, what’s most fascinating about Pharrell’s first-ever No. 1 hit as a lead artist isn’t just that it’s the return of African-Americans to the top of the pops. (Even as current hits by Beyoncé, Jason Derulo, and John Legend occupy the top five, it’s way too soon to declare that R&B is “back.”) It’s also how singular—literally exceptional—Williams’s career has been.

Start with the rare feat of hitting No. 1 after singing on hits by dozens of other acts. Prior to “Happy,” Williams sang on three songs that topped the Hot 100: Snoop Dogg’s “Drop It Like It’s Hot,” Ludacris’s “Money Maker” and, of course, Thicke’s “Blurred Lines.” Those are just the No. 1s—the list of lesser hits is long: Mystikal, Jay Z, Britney Spears, Busta Rhymes, Clipse. All scored hits spiced with Pharrell’s wispy falsetto. (On at least one Diddy track he’s rapped competently, as well.) Outside of R&B and hip-hop, about the only vocalist with a similarly Zelig-like ability to attach himself to hits was Paul Carrack, the British blue-eyed-soul singer featured on Ace’s 1975 smash “How Long,” Squeeze’s classic 1981 shoulda-been hit “Tempted,” and the Genesis side project Mike + the Mechanics. With that last group, Carrack finally scored his only U.S. No. 1 hit, the mawkish 1989 chart-topper “The Living Years.” But Carrack’s name wasn’t on any of those songs. Pharrell, by contrast, spent years as pop’s special sauce and is now enjoying his moment as a main dish.

Pharrell’s also a late-bloomer, scoring his first No. 1 at age 40 (even if the dude looks so ageless he’s had to deny rumors he walks among the undead). “Happy” doesn’t make Pharrell the oldest Hot 100 penthouse debutante, not by a long shot, but he has been producing and writing since 1992. That’s when new jack swing pioneer Teddy Riley tapped him and his Virginia Beach homie Chad Hugo to help produce the No. 2 dance-rap smash “Rump Shaker” by Wreckx-N-Effect. Calling themselves The Neptunes, Williams and Hugo went on to produce and write hits for Blackstreet, Noreaga, Kelis, Ol’ Dirty Bastard, No Doubt, N Sync, Beyoncé, and Justin Timberlake in a decade-long streak that found their percolating, syncopated, minimalist sound dominating Top 40 and black radio. At The Neptunes’ peak in 2002, they not only produced a seven-week chart-topper—Nelly’s “Hot in Herre”—they also put out a superb album as the rock band N*E*R*D, getting raves from critics.

Producers who have successfully transitioned into recording careers are few. In rock, there’s Alan Parsons, whose career was impressively long but whose pop success was limited. The majority are in the worlds of R&B and hip-hop. Sean “Diddy” Combs is the obvious example, although he waited barely a half-decade between producing Mary J. Blige and scoring No. 1 hits rapping alongside Biggie Smalls. Similarly, Kanye West was preparing his rap debut so soon after launching as a producer that his early work for Jay-Z feels like a dress rehearsal. More patient was Tim “Timbaland” Mosely, a true contemporary to Pharrell (and fellow Virginia native) with a similar trajectory, starting in the ’90s with a very distinctive syncopated production sound before exploding in the ’00s. Tim’s string of mega-hits, for the likes of Missy Elliott and Justin Timberlake, was capped in 2007 by his only No. 1 as an artist, the forgettable, Timberlake/Nelly Furtado–vocalized “Give It to Me.” But Timbaland hasn’t made the mark as a rapper that Pharrell’s made as a singer.

That leaves only Quincy Jones, a true legend among producer–artists, whose albums under his own name have generated hits and won Grammys. Q produced Thriller and “We Are the World” and he’s probably forgotten more production jobs than Williams has ever been offered. But Jones doesn’t sing, and while he’s produced a dozen No. 1 hits, as a credited artist he’s never scored a Hot 100 No. 1. Advantage … Pharrell?

I’m not seriously suggesting that Williams is in Quincy’s class or ever will be—only that, in his forties, the guy is building a career for which there is essentially no prior model. He even made a bit of history just last night, as the first person to perform the No. 1 song in the country as a nominee at the Academy Awards. Sure, it would have been more history-making if he’d actually won the statue, and I hope you didn’t lay too much money on Williams in your Oscar pool. But I wouldn’t blame if you if did—Pharrell’s done the improbable before.

Why Is This Song No. 1?
Katy Perry’s “Dark Horse”
Pitbull and Ke$ha’s “Timber”
Eminem’s “The Monster”